A Guide to Southend

Southend, Essex is a resort town on the north side of the Thames Estuary. Only 40 miles east of central London, it’s a strategic location for a short getaway. There are plenty of things to do in Southend, from exploring its best beaches to discovering the historic fishing village of Old Leigh.

A Brief History of Southend

Southend hasn’t always been a holiday destination. It started off as a poor farming and fishing area to the south of the village of Prittlewell. In the late 1700s, the High Street began to form as the land around it was sold. Although coaches coming from London made Southend more accessible, transport links between the two were not well developed. This meant that Southend didn’t see a speedy growth compared to other seaside resorts like Brighton. The arrival of the railways in the 19th century was what really transformed Southend into a holiday destination. The Pier was constructed and the Cliffton development was built, which brought a boom in tourism. Although the popularity of Southend declined in the 1960s, as with many other British seaside resorts, today it still sees approximately 6.4 million tourists per year.

Things to do in Southend

At 2,158 metres, this is the longest pleasure pier in the world. A wooden Pier was first opened in 1830, although it was extended and renovated several times, and eventually replaced with an iron construction. If you don’t feel like walking the entire length, the Pier has a railway which runs back to the station on the shore. At the Pier head, you’ll find the Royal Pavilion, which features plays, concerts and exhibitions throughout the year. If you want to learn more about the history of the Pier, pop in to the Southend Pier Museum to see exhibits including old penny slot machines and an original toastrack tram from 1890.

A cliff funicular brings back the nostalgia of a traditional English seaside holiday. The Southend Cliff Railway was constructed in 1912, and has since been restored to its original glory. It’s a fun way to admire the views of the Pier and the Thames Estuary. It runs up and down between Clifton Terrace and Western Esplanade, passing through the beautiful Cliff Gardens.

There are many beaches around Southend that are waiting to be explored. A 10 minute train ride from Southend Central takes you to Shoebury East Beach. This long, sandy beach is fenced by grassy hinterland, and offers great sunrise views over the Estuary and North Sea. The beach is popular for watersports, and the Essex Kitesurfing Club is based here. Another popular spot for watersports is Thorpe Bay Beach. Lined with colourful beach huts, there is plenty to do here, including sailing, windsurfing and kayaking. If you want to get away from the hustle and bustle, head to Chalkwell Beach. This beach is great for rock pooling when the tide goes out, and there are a few shops and kiosks along the promenade selling buckets, spades and other beach gear.

Wandering around Old Leigh is a great way to soak up the atmosphere of a historic fishing village. Old Leigh, which is the old part of Leigh-on-Sea, was once a riverside settlement that served as the main shipping route to London. By the 16th century, it had become a thriving port, and it was one of the busiest on the Thames. When the railway line arrived, a large part of the town was destroyed in order to make room for the railway. What’s left of it is worth exploring – admire the old cobbled streets, cockle sheds, weatherboard houses and gaslights, or head to one of the cosy pubs and take in the views of the Estuary.

If you’re a wildlife enthusiast, then make sure to visit Gunners Park. This 25 hectare nature reserve in Shoeburyness is a 10 minute drive from Southend. From grasslands to ponds, the area is made up of over 12 different habitats, providing a home to a variety of rare animals like the Sandwich Click Beetle and the Cuckoo Wasp. It’s also a haven for migrating birds such as the Spotted Flycatcher and Yellow-browed Warbler. Make your way along the coastal walk to find hundreds of waders, and if you’re lucky, you might even spot a Grey seal.

Things to Do in Southend

Perched on a clifftop, the Gleneagles Guesthouse offers panoramic views of the Thames Estuary, Cliff Gardens and Southend’s seafront, and is only a few minutes walk from the attractions. The grade II listed building has single and family rooms, as well as seaview suites. For a bite to eat, head to the Tea Rooms which serve light lunches and afternoon tea.

If you’re looking for a hotel with oodles of character, then Hamiltons Boutique Hotel is a great choice. The grade II listed Georgian building is full of quirky touches, and offers various types of suites. Hamiltons also has stunning views of the Pier and the Thames Estuary, which are all a few minutes walk from the hotel.

This family run hotel has a variety of rooms overlooking Thorpe Bay, from singles and doubles, to family and executive suites. The hotel’s restaurant, which holds an AA Rosette, serves fresh breakfasts every day, as well as a wide range of evening menu options.

Places to Stay in Southend

Trying fresh seafood is a must when visiting Southend. A 12 minute drive from the centre of town, the Osborne Bros Seafood Merchants specialise in all seafood, from oysters to prawns to cockles.

The Pipe of Port

Combine classic and contemporary British dishes with Dickensian decor at The Pipe of Port. The restaurant serves pies, steaks and fish dishes – with an impressive wine list of 150 bottles.

For dessert, head to Tomassi’s. This Italian restaurant makes delicious homemade ice cream sundaes in a wide variety of flavours, complete with cream and cherries on top.

Places to Eat & Drink in Southend 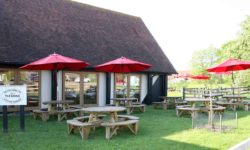 Tiptree Tea Room at The Barns 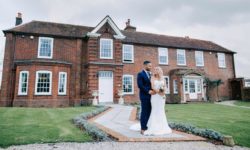 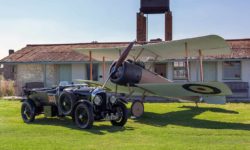 View Details
A Guide to Colchester A Guide to Chelmsford Things to Do in Essex Fetes, Fairs, & Shows in Essex
Essex