Things to do in West Yorkshire

West Yorkshire has a wide choice of great of days out for all the family. There are a host of museums to enjoy – try the Bronte Parsonage Museum at Haworth, The Royal Armouries Museum at Leeds to discover the display of National Collection of Arms and Armour or Eureka! The National Children’s Museum. For something different try the National Coal Mining Museum for England where you can take underground tours.

For those looking to escape to the countryside there are plenty of areas for walking, relaxing and taking in the fresh air – the rolling contours of Ilkley Moor part of Rombalds Moor give rise to some spectacular views, as does Otley Chevin which overlooks the town of Otley from the south side of Wharfedale. Birdwatchers will love Fairburn Ings Wetlands Centre.

There are a number of historic buildings, fortifications and castles in West Yorkshire – Kirkstall Abbey is a ruined Cistercian monastery on the banks of the River Aire, Sandal Castle is a medieval ruin at Sandal Magna overlooking the River Calder whilst Oakwell Hall at Birstall is an historic Manor House with an interesting interior, gardens and parkland. At Shipley you will find the Victorian model village of Saltaire and the Titus Salt Mill.

West Yorkshire has a number of stately homes and magnificent gardens open to the public. Harewood House is a magnificent house with stunning views and landscaped gardens extending to include terraces, lakes and a bird collection. Nostell Priory has a delightful interior whilst outside you can wander the parkland grounds. The 17th century manor house of East Riddleston Hall has many interesting architectural features including a large fireplace, whilst outside the gardens provide year round colour. Temple Newsan House is a stunning Tudor-Jacobean house in 1500 acres of grounds, designed by Capability Brown, which also includes a working rare breeds farm. The distinctive York Gate Garden at Leeds is a magical garden with 14 separate “rooms”.

There is plenty to do from a sporting perspective with football teams at Huddersfield, Bradford City and Leeds United. Headingly is the Yorkshire County Cricket Ground which also hosts international test matches. There are two racecourses – Wetherby and Pontefract and there a host of rugby league clubs in county.
Looking for some retail therapy? Then take a visit to The Mill at Batley – a huge outlet centre, Castleford also has an outlet centre and then city of Leeds has the Victorian Quarter, Merrion Centre and Corn Exchange giving visitors a wide range of choice.
West Yorkshire’s famous names include actor and director Alan Bennett, poet Ted Hughes, comedian Ernie Wise, chef Marco Pierre White and actor Patrick Stewart.

West Yorkshire has a large range of annual events including the Leeds Music Festival, Bradford Literature Festival, Pontefract Liquorice Festival, Festival of Food, Drink & Rhubarb and a number of agricultural and food shows.

West Yorkshire’s famous food includes rhubarb – the Rhubarb Triangle of Wakefield, Morley and Rothwell is famous for the production of rhubarb which is harvested by candlelight, the ginger cake Parkin and liquorice sweet – Pomfret cakes.

Browse more things to do in and around West Yorkshire 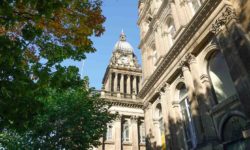