A Guide to Pakefield

Interested in learning more about the nearby areas? Why not read our guide to Suffolk’s towns and villages.

Sitting atop the cliffs of some Suffolk’s most dramatic coastline, Pakefield is a thriving village, close enough to Lowestoft for access to many Suffolk attractions, and yet self-contained enough for a great weekend hideaway. You can explore the rich history of St. Margaret’s & All Saints Church, or head down to the beach, dotted with fishing boats and accessible from several points from the village. Yoxford is just a 25 minute drive away, so there are plenty of choices for nearby places to explore.

Pakefield most likely gets its name from Pacca’s or Pagga’s field, named after a local landowner. What was a small community of around 300 people in the early 19C now has more than five times that number, a quiet haven south of nearby bustling Lowestoft – click here for things to do in Lowestoft.

This is not to say its history only goes back to the 1800’s, quite the opposite in fact. Pakefield is the site of an archaeological dig revealing evidence of dwellings from over 700,000 years ago. It represents the earliest unequivocal evidence of human activity in northern Europe. Pre-historic tourism?! Perhaps.

Pakefield makes a great base for those wishing to see the Suffolk Wildlife Park, take the kids to visit the fantastic Marina Theatre which hosts a wide variety of entertainment. For the sports aficionado, Kirkly FC’s ground is nearby, and Kensington Gardens has a park with tennis courts.

A Brief History of Pakefield

Flint tools discovered at Pakefield have been found to be used by early humans around 700,000 years ago, 200,000 years older than previous finds. While humans were known to have lived in southern Europe at that time, it has been unclear when they moved north. Professor Chris Stringer of the Natural History Museum’s Department of Palaeontology confirmed that the tools displayed all the hallmarks of human workmanship, and were not the result of natural erosion. The tools were used for scraping, cutting and sawing.

The earliest evidence of human existence in southern Europe dates back 800,000 years, at sites in Spain and Italy. However, it was thought that longer winters and shorter growing seasons further north kept early humans from migrating to Northern Europe. After numerous tests on soil samples from Pakefield, it was revealed that the climate 700,000 years ago was similar to the present day Mediterranean region.

“The fact that we know that there were people in Britain at this early date means we can start to look for further evidence of them and perhaps one day be lucky enough to find fossil remains of these people,” reports Professor Stringer.

Pakefield’s lighthouse is a well kept secret, in fact, it’s a secret that may even be unknown to some residents! The shifting sandbanks in the waters of this coastal area make navigation difficult between Barnard and Newcome sand banks. In 1831 work was began on the lighthouse on the grounds of Pakefield Hall. However, the changing sandbanks and coastline moved too far south over the next three decades, the lighthouse became obsolete and was finally extinguished in December 1864.

It remained derelict for nearly seventy years till the lighthouse and the cottage served as a bar for Pakefield Hall Holiday camp during the 1930’s, and later a darkroom by Pontin’s Holiday centre photographer. In 2000, volunteers renovated the lighthouse, which now serves as a Coastal Surveillance station.
Rumors also have it that the area around the lighthouse is home to the ghost Crazy Mary, a fisherman’s wife whose spirit has walked Florance Road at 9 o’clock every night, searching for the sails of her lost husband’s ship.

Mentioned in the Domesday Book at the end of the 11th century, Pakefield’s two semi-detached churches, St. Margaret’s and All Saints, share a fascinating history. The church (actually two churches sharing one wall) is most likely the first permanent building in Pakefield, and peculiar in that it has two almost identical naves and chancels. Each section had it’s own rector and congregation until the mid-15th century during Cromwell’s time, when most of the splendour of the church was destroyed, and during the Second World War the thatched roof and most of the furniture were burnt when incendiary bombs were dropped during an air raid. Rebuilding began as soon as possible, and it was the first church in England to be rebuilt and rededicated after the war.

Things to do in and around Pakefield 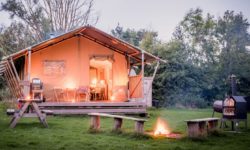 View Details
See more things to do around Pakefield
Suffolk